The Jews of Crete and Etz Hayyim Synagogue

Under various occupations – Roman, Byzantine, Andalusian Arab, Venetian and Ottoman – the Jews of Crete were a distinct and quite fascinating thread of continuity. Toward the end of the 19th century as a consequence of the struggle between the European Powers over the fate of the Ottoman Empire and insular revolts aimed at unifying Crete with the mainland of Greece, Jews began to emigrate until by 1941 there was only one community that survived – that of Hania – numbering approximately 330 people. It had two synagogues dating from the Middle Ages – Beth Shalom and Kal Kadosh Etz Hayyim.

In that year during the bombing and strafing of Hania at the beginning of the battle of Crete, Beth Shalom was destroyed leaving only one synagogue to serve the needs of the community. In May of 1944 the entire community was arrested by the Nazis and after a period of incarceration in a nearby prison they were sent by convoy to Herakleion where they were herded onto a ship, the Tanais. In the early hours of the following morning halfway to the port of Piraeus the ship was struck by torpedoes fired from a British submarine and sank within fifteen minutes – leaving no survivors.

Until 1995 the Jewish Quarter and Synagogue of Hania slowly sank into near oblivion and the memory of the tragedy was almost obliterated in the enthusiasm to develop Hania as a tourist centre. A serious earthquake damaged the synagogue to the point of imminent collapse and not long after Nikos Stavroulakis gave a paper at a symposium sponsored jointly by the World Monuments Fund and the Jewish Heritage Program in New York. Not long after a decision was made to include Etz Hayyim in the list of 100 most endangered monuments of international cultural concern in 1996. In the august company of Hagia Sophia, the Temple of Minerva in Rome etc. Etz Hayyim began a new period in its long history. Through the Ronald S. Lauder Foundation an initial grant was given for the restoration project which was put under the aegis the of the World Monuments Fund in cooperation with the Central Board of Jewish Communities of Greece. Work began on the project in 1998. The Director of the project has been Nicholas Stavroulakis, Emeritus Director of the Jewish Museum of Greece and funding has been provided by the Rothschild, Lauder, Rosenberg, Rose and other foundations of note as well as interested individuals.

The synagogue was officially re-opened on 10 October 1999 when the mezzuzoth were put on its doors and a Sepher Torah was brought ceremoniously into the Synagogue.

The Architecture of Etz Hayyim

The Layout of Etz Hayyim.

The site of the complex of Etz Hayyim is dominated by the synagogue proper. In its present state it consists of two courtyards: what is now the Ronald Lauder Garden to the south has several tombs as well as access to the mikveh, and the pebble paved courtyard to the north dedicated to the ‘Friends of Etz Hayyim,’ which is bordered at its northern flank by a building which was the former Talmud Torah school of Hania, now a café (with no connection to Etz Hayyim Synagogue). Both courtyards have separate entrances. The north courtyard is entered through the Rothschild Gate. The small entrance to the southern courtyard originally led into the women’s section which was covered by a large dome; visual access from the first floor to the interior of the synagogue was through a large Venetian arch. The large gate leading into the area in which several tombs are located was probably cut there when this area was given a ‘hedge’ or symbolic wall (eruv) separating it ritually from the entire complex. It is also possible that this gate afforded access to both the graves as well as the communal mikveh that was shared with Beth Shalom Synagogue. 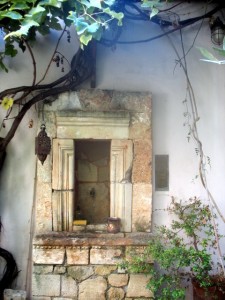 The Northern courtyard has a fountain set in its eastern wall that has been re-constructed using material that were found in the roof after its collapse in 1995. Opposite this is a small rose garden dedicated to the late Judith Humphrey and adjacent to this is a relatively ‘new’ structure that must have been put up in the mid to late 19th century. The ground floor was the shamash’s or caretaker’s lodge and above it was an additional women’s viewing area.

The interior of Etz Hayyim is laid out according to the tradition of Romaniote Jewish communities in Greece. Several examples have survived notably in Ioannina, Halkis, and Corfu and what remains of the interior furnishings of the synagogue of Patras. This layout is quite different from that of the Sephardi synagogues in Greece and can also be found in Venice, elsewhere in Italy, and occasionally in Turkey and North Africa. In keeping with all synagogues the Ehal (Torah shrine) is located on the East wall but as is typical of Romaniote synagogues, the Bema (elevated platform for reading the Torah) is located axially opposite to it against the West wall.

The seating arrangement follows this polar-axial arrangement so that the benches are either against the walls (south and north) or along the central aisle. It is a highly practical solution to the problem of processions where the congregation must follow the Torah as it is being brought from the Ehal to the Bema and back again, or even the interior circuits that are performed at certain festivals, e.g. Sukkoth. From the place where one is sitting (or standing) one can easily face East or West or reach out to touch the Torah.

Interior photo of Etz Hayyim, with the Ehal on the left and the Bema on the right.

Visual access to the interior for the women was possible through a lattice-work screen in the S/E Gothic arch and another smaller women’s section is located above the caretaker’s lodge to the N/W. The former domed structure was completely destroyed in 1941, rebuilt in 2008 as the Jennifer Stein Memorial Library. Both spaces now house part of the Synagogue’s library as well as offices.