The Tombs of Etz Hayyim 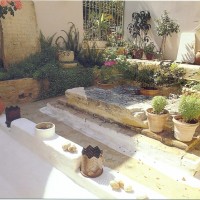 In the Ronald Lauder Courtyard four graves of rabbis are located, which are mentioned by Crete’s last Chief Rabbi Abraham Evlagon in his memoir. In this he gives the precise names and dates of Rabbis Joseph B. Shlomo (d. 1821) and his brother Rabbi Baruh Shlomo (d. 1841). There was also a grave of Rabbi Avraham Z. Habib of Gallipoli who died in 1858 and a fourth grave of Rabbi Hillel Eskenazi, a noted mystic and kabbalist who died in 1710. Evlagon also notes that this last burial was recorded only in tradition and that its site had been lost. During the reconstruction of Etz Hayyim Synagogue, in the course of removing rubble as well as the paving stones of the ground floor of the women’s section we found that under the stone stairs there was a tomb that had been incorporated into the support wall. This is undoubtedly the tomb of R. Hillel, which was not visible when Evlagon wrote his memoir.

The close association of the tombs of the Shalom brothers is explained by a note that Evlagon adds where he says that before he (Rabbi Baruh Shalom) died he requested that he be buried by the side of his brother. Apparently the need to bury within the walls of Hania (forbidden by Jewish law) was made necessary after what Evlagon describes as a ‘scandalous affair’ that forced the Jews to barricade themselves behind the gates of the Zudecca for several days. Once an exception had been made additional burials took place according to circumstances that might have engendered a reticence to moving a body over to the Jewish cemetery in Nea Hora – outside the city wall.