The Memorial Scroll at Etz Hayyim 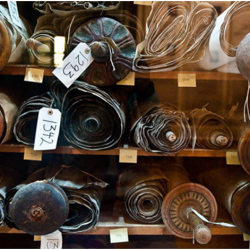 When Etz Hayyim Synagogue was reopened in 1999 as a place of prayer, it was in need of a Torah Scroll, the five Books of Moses written by hand on parchment that includes the basic laws and tenets of Judaism and is central to the synagogue service. In February 2000, Etz Hayyim received Memorial Scroll No. 1227 from the Memorial Scrolls Trust (MST) of Westminster Synagogue in London on permanent loan. The Memorial Scroll is regularly used for festival services and Bar and Bat Mitzvahs at Etz Hayyim.

The Memorial Scrolls Trust was established in 1980 to care for and restore 1,564 Torah Scrolls that had arrived from Prague in 1964. From this time onwards, some 1,400 Torah scrolls have been allocated to over 1,000 communities and organisations around the world.

The Story of the Czech Torah Scrolls

The MST holds and cares for a collection of scrolls originating from synagogues in Bohemia and Moravia that were saved from destruction by members of Prague’s Jewish community during the Second World War. For more than a 1000 years, Jews had lived in Bohemia and Moravia and had developed a rich Jewish culture. After the German invasion in 1939, the historical congregations were closed down and their synagogues were razed or deserted. In 1942, members of Prague’s Jewish community decided to gather the religious artefacts from destroyed synagogues. They persuaded the German occupants to accept their plan and as a result, they collected more than 100,000 artefacts and brought them to the Jewish Museum of Prague. Among the artefacts were about 1,800 Torah scrolls that were labelled in Czech and German with a description of the place from which it originated. Except for one survivor, all the curators and cataloguers of the museum were eventually deported to Terezin and Auschwitz. After the war, the scrolls were transferred to the abandoned synagogue at Michle outside of Prague. In 1964, the Memorial Scrolls Committee of Westminster Synagogue in London arranged the shipment of 1,546 Torah Scrolls to London where they were catalogued, restored and repaired to be eventually sent to synagogues and organisations all over the world for religious and educational purposes to synagogues in need. Since September 2008, the Czech Memorial Scrolls Museum at Kent House, the home of Westminster Synagogue, tells the story of the scrolls and their odyssey from Bohemia and Moravia to Westminster Synagogue in London and then on to new homes throughout the world.

Memorial Scroll No. 1227 at Etz Hayyim

“As I am the sole Jew here, I was in a bit of a quandary – to lead it into the synagogue alone – or to wait until such time as one could do traditional honours with perhaps some visiting Jews attending. In the end, I decided that I would simply pray that all of the 263 victims of our community would be with me in some spirit. Lacking the tradition that we have of showering a new Sepher with sweets and flowers as it is taken up to the Ehal, I wrapped it in a tallet, put around a quite exquisite Torah binder set with a silver clasp with the Shema on it and hung over one of the etzim a silver yad (both gifts that were recently sent) and placed it in the Ehal, along with a chocolate bar! I had recently pruned one of the olive trees and so I put the branches in a vase in front of the Ehal. It was a very powerful and moving experience for me and I am deeply grateful that the Sepher was given a new home here in Hania. I pray that for many years, it will be the companion of our other Sephrei.”