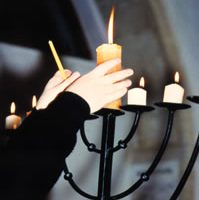 Since its re-dedication in 1999 the synagogue has attracted a community of its own making that has evolved into a Havurah or fraternity of persons who share certain common values though perhaps being of different religious affiliation. The term Havurah is derived from the term ‘haver’ or friend in Hebrew. But it also has the meaning of a ‘circle’ or ‘joining’. Hence a Havurah is a circle of friends joined together in a common ideal or search which in our Havurah is considered to be the search for an authentic spiritual life. This type of association is very ancient and may even be what is referred to in Tanah when it speaks of “Samuel and his band of Prophets.”

The members of our Havurah act as caretakers of the synagogue as a place of prayer and convocation. Some are observant, conservative, reform, reconstructionist or secularised Jews; others are Christians and some are Muslims. What binds the members of the Havurah together is a sense of the need for community and sharing of a common pursuit as opposed to the consumer oriented, ecologically indifferent and valueless society that by necessity we are also a part of.

At present we are in the process of defining our Havurah within the tradition of havuroth that we know existed prior to the 1st century CE and which have seen a resurgence of in the 20th and 21st century in Israel, the US, England, France and Germany.

Also we are involved in defining our role and our responsibilities as Jews associated in Etz Hayyim. We feel that what is essential is that we see ourselves as representing Jewish values which, as it happens, are values that not only do we share with other great religions – Christianity, Islam and Buddhism – but which determine civilized life and aspirations.