The Exhibitions at Etz Hayyim

Etz Hayyim Synagogue has, over recent years, planned and curated a number of small temporary exhibitions on an array of subjects in collaboration with both local and foreign artists, as well as our permanent exhibition about Nikos Stavroulakis’ rebuilding of the synagogue in the mid-late 1990s.

Over the course of several months in early 2016, the staff at Etz Hayyim prepared an exhibition about Nikos Stavroulakis (an academic, art historian, writer, painter and printer) and his rebuilding and revival of the synagogue entitled Etz Hayyim: 20 Year Commemoration of the Reconstruction 1996 – 1999. The exhibition marked the 20th anniversary of the beginning of the synagogue’s reconstruction and was officially opened on 14 June 2016 in the exhibition space above the administrative office. The staff felt it important to honour Nikos’ initiative by presenting nine individual information panels that highlight the step-by- step process of the renovation project, but told in Nikos’ own words and with personal quotes and photographs to accompany the text. This narrative is routinely explained by our staff members to Etz Hayyim’s many visitors because the story of the synagogue’s reconstruction and of Nikos are mutually intertwined. Yet, the exhibition has so far allowed visitors to fully appreciate Nikos’ initiative in undertaking this important project, together with his lasting vision for Etz Hayyim as an all-inclusive place of prayer, recollection and reconciliation, with the use of carefully selected photos of the ruined and abandoned synagogue as it stood for fifty years from 1944 to the mid-1990s.

This exhibition is open to the public during the synagogue’s opening hours. A full account of Etz Hayyim’s three-year reconstruction project and its reopening by Nikos Stavroulakis is documented in the “Commemorative Album” which is available against donation from the synagogue.

“Tales from an Old Fort Town”: A Personal Response to the Jewish History of Crete 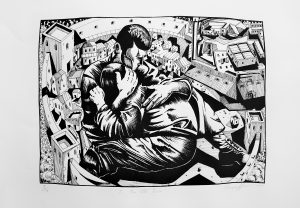 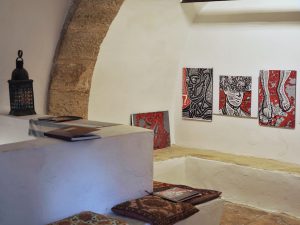 In 2017, Etz Hayyim received an email from Cretan artist, George Sfougaras explaining that after a visit to the synagogue, and with the realisation that as a child he was told very little about the history or even presence of the Cretan Jewish community, he had created “a small book as a personal response to the Jewish community and their plight” and that he “would be very grateful if you could let me know what you think”.  Soon afterwards, we received an electronic version of the book at a time when Nikos Stavroulakis (whose work, particularly at Etz Hayyim, had made an impression on George during his earlier visit) was still able to view the art and provide the feedback that George had so kindly requested. Nikos fully shared the idea that the history of the Cretan Jewish community had been largely overlooked and was thus appreciative of George’s approach and the execution of his project. Nikos also suggested that the artwork should one day be displayed at Etz Hayyim.

Tales from an Old Fort Town, a title referring to George Sfougaras’ birthplace of Heraklion in Crete, expresses a sensitivity to the richness of the island’s long and complex history, as well as the integral role that Crete’s Jewish community and other neglected communities played in that history. The artist shows that the irreversible loss of the Cretan Jewish community in the Second World War was not just a terrible tragedy for the members of that community, but also a major loss for Crete and the Cretans, themselves, who have perhaps increasingly lost touch with the complexity and richness of the island’s past. We at Etz Hayyim are confident that George’s artwork will add a valuable and much-needed dimension to the general understanding of Cretan history.

The exhibition was first shown in October 2018 in the Mikveh where it is still displayed today. The works are accompanied by a book which the artist describes as “my personal response to the history of the Jewish community of Crete…[that] played an important part in the life of the island but which, through ignorance, racism and religious intolerance, has now disappeared. The community had almost been eliminated entirely and so I had to search long and hard to find its few remaining traces. My motivation for creating this book lies in the belief that the Cretan Jewish community is remembered, while the hatred that destroyed the community is recognized and addressed, accordingly. The book stands as a brief personal tribute, as an echo of a Greek community that is no more and as a work of love for the island of my birth. All of the illustrations were originally completed as monochrome pen and ink designs for screen prints and are an essential component of my on-going work into the many histories of Crete”. In his book, George’s artwork is enhanced by the evocative poems of Shelly Tracey, a South African poet with Latvian and Lithuanian Jewish roots. For Shelly, her poems serve as an addendum to George’s response to the disappeared Jewish population of Crete. For the poet, “George has captured a sense of loss in his powerful prints and in his account of why he decided to create this project. My poems are influenced by the experiences of the Jews who were forced to leave Crete and also by George’s evocative images”.

George Sfougaras’ Tales from an Old Fort Town exhibition is currently on display in the Mikveh and is open to the public during the synagogue’s opening hours. His exhibition booklet is available at the synagogue against donation.

“Tel Aviv & Jerusalem Through My Eyes” 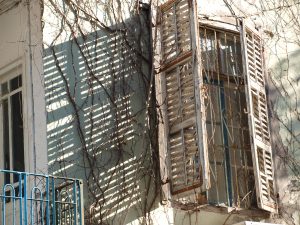 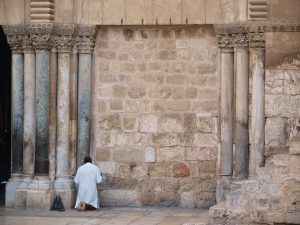 In the words of Cretan photographer, Maria Sanadaki:

“Traveling alone, exploring with no guidance. Using just a tiny map and a camera. I had the chance to open my eyes widely, to talk with the locals in each neighbourhood and to receive the hospitality of Israelis. Tel Aviv was as chaotic and loud as Athens. It reminded me of Thessaloniki´s neighbourhoods too, the smell of fruit and baked food. There were cats everywhere, kids playing outside and people talking from their balconies to each other. Different cultures, the sunsets, salt on the skin and the wind at the ports of Tel Aviv and Jaffa. All of these experiences make someone wish to visit this place again. The pure feeling I have for Etz Hayyim and the way I felt while being in Israel inspired me to depict Tel Aviv, Jaffa and Jerusalem through my eyes. The first thing you come upon when you enter through the synagogue’s gate is the garden. A garden full of visitors and those people who work there. Full of life, not only from the people, but all those plants and the synagogue cats as well. Somehow, I eventually visited Etz Hayyim in the spring of 2015. It was then that I met Moritz Plattner, Momo, who was a volunteer there at the time. Since then, we have become very good friends. At the time, he gave me a short tour and then I volunteered to translate the website from English into Greek. However, the reason I remained volunteering there is the amazing aura which Etz Hayyim exudes. Every time I find myself there, I feel free and happy”.

Maria Sanadaki’s photographic exhibition is currently on display in the Jennifer Stein Memorial Library and is open to the public during the synagogue’s opening hours. Some of her photos have been reproduced as prints and postcards which are available at the synagogue against donation.