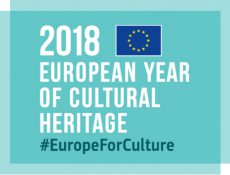 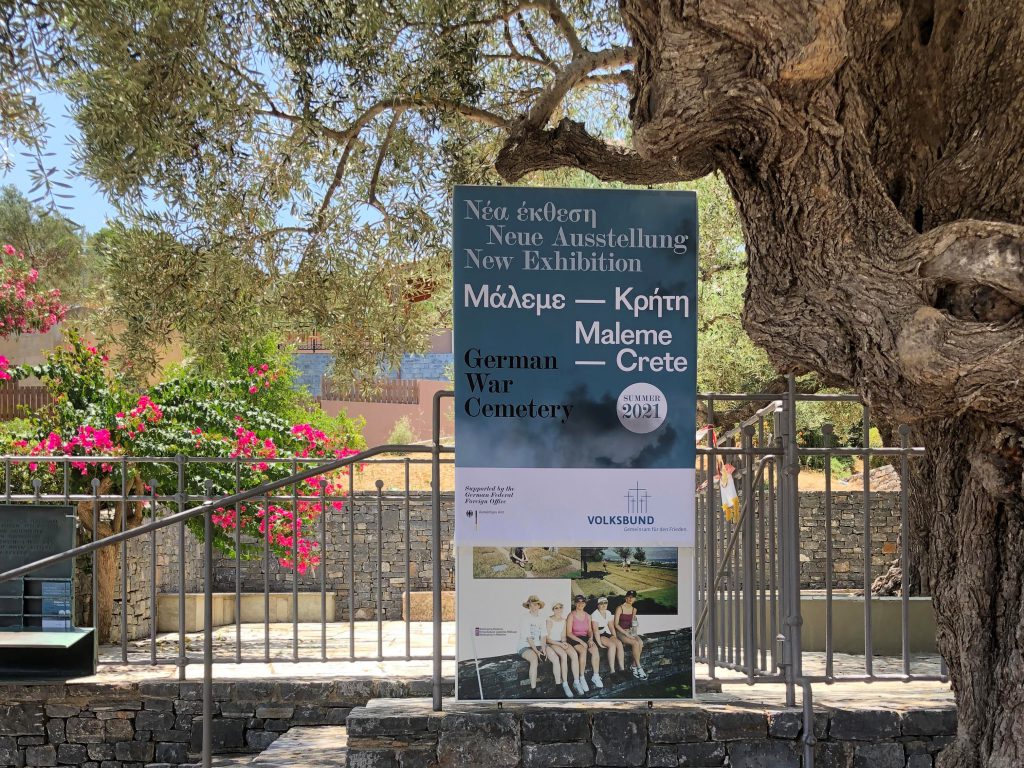 Every year since 2013, the staff at Etz Hayyim Synagogue is joined by a young Austrian volunteer from the Austrian non-profit organisation, GEDENKDIENST (Holocaust Memorial Service).  The organisation carries out critical educational work on Austria’s historical responsibility and sends young Austrian volunteers for a period of 12 months to 20 different locations worldwide, including historical and memorial sites, museums, and research and educational institutions that deal with the remembrance and awareness of crimes committed by the “Third Reich.” These institutions include the US Holocaust Memorial Museum in Washington, D.C., the Anne Frank Stichting in Amsterdam and Yad Vashem in Jerusalem. The tasks of the volunteers range from supporting or being a part of projects that undertake research into the Holocaust, commemorating the victims of Nazism and taking care of the survivors in retirement homes as a voluntary social service or an alternative to compulsory military service.

A year at Etz Hayyim provides a unique experience for each Gedenkdiener to learn about many aspects of Jewish and Cretan history and culture, to participate in community events and holidays and to meet people from all over the world. The young volunteers are also key staff members who contribute decisively to the work undertaken at Etz Hayyim: the Gedenkdiener supports the staff in giving guided tours to visitors, contributes to research and publications, and helps to prepare community events and exhibitions on specific temporary projects. In 2015, for instance, the Gedenkdiener organised the presentation of the photography exhibition, “Intercultural Encounters” at Etz Hayyim in cooperation with the Austrian Embassy in Athens. Furthermore, an exhibition about the reconstruction of the synagogue was prepared with the help of our volunteer in 2016. Visitors have repeatedly expressed their admiration for the work carried out by the individual Gedenkdienleistenden and have commended the GEDENKDIENST initiative as an important contribution to preserving the memory of the victims of the Second World War and an acknowledgement of Austria’s historical responsibility. All Gedenkdienstleistende describe their impressions and experiences during their tenure in our Jottings newsletter under the section, “Gedenkdienst at Etz Hayyim”. 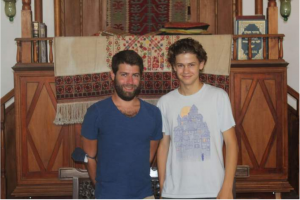 Click on the dots below to read more of their articles! 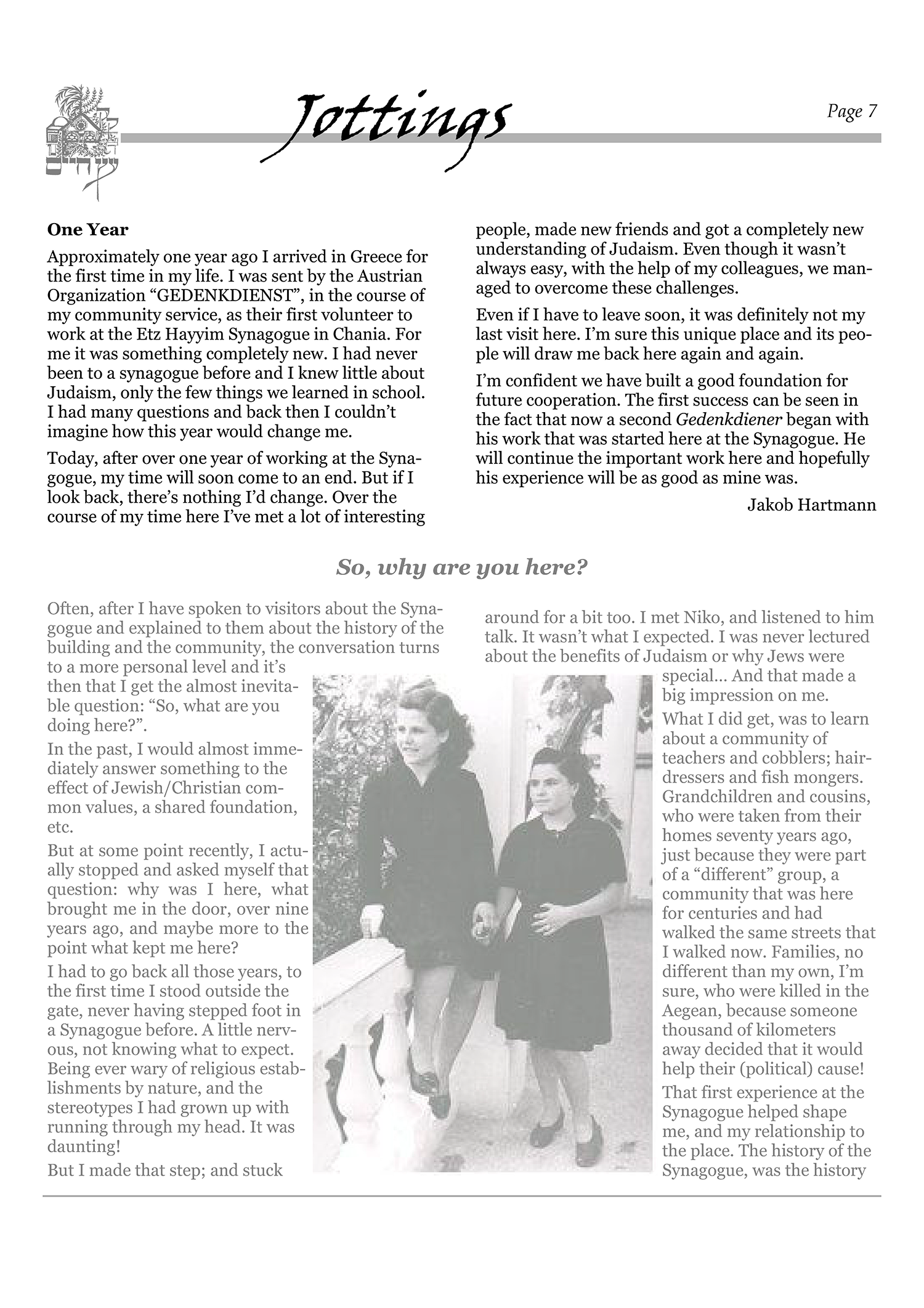 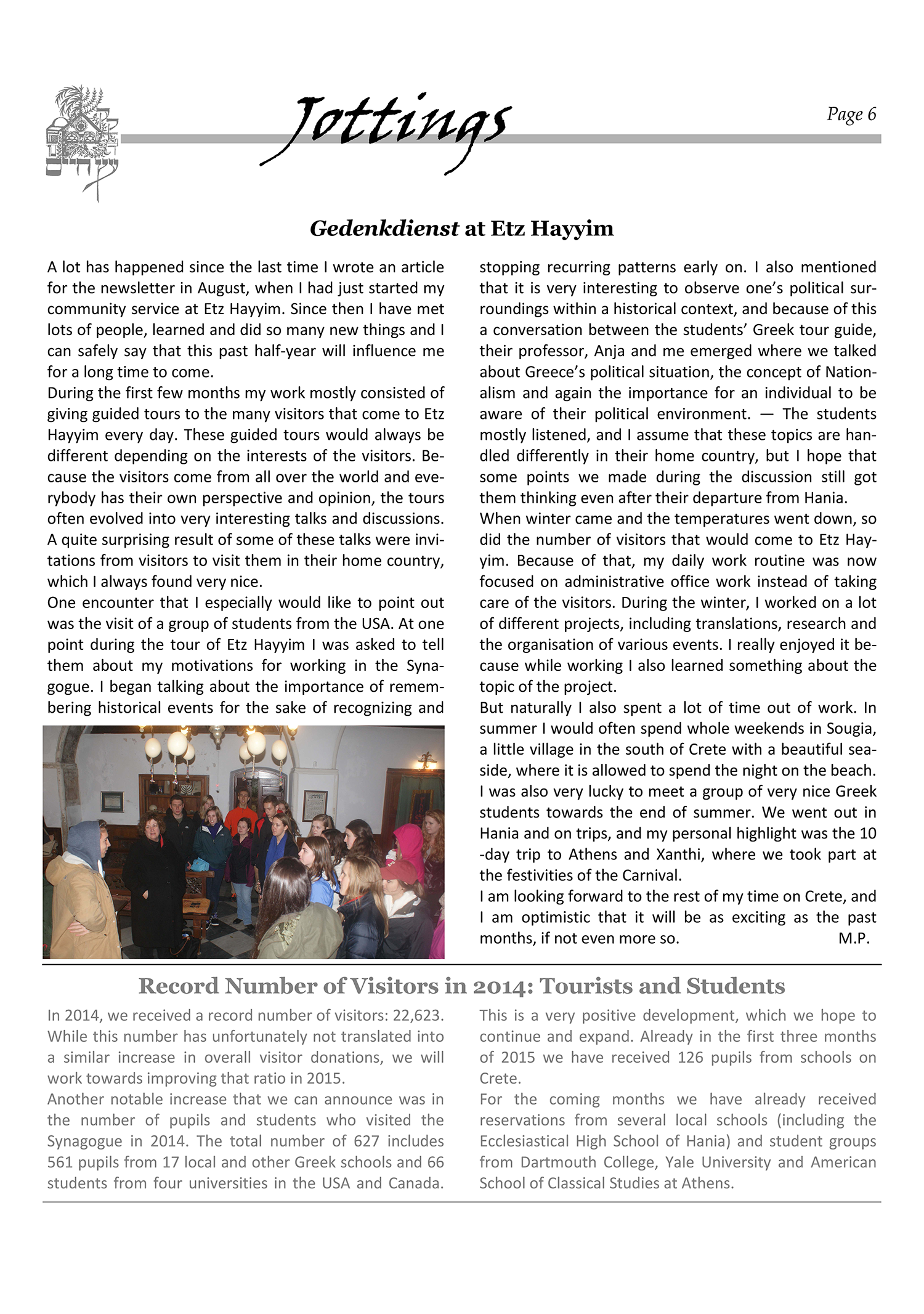 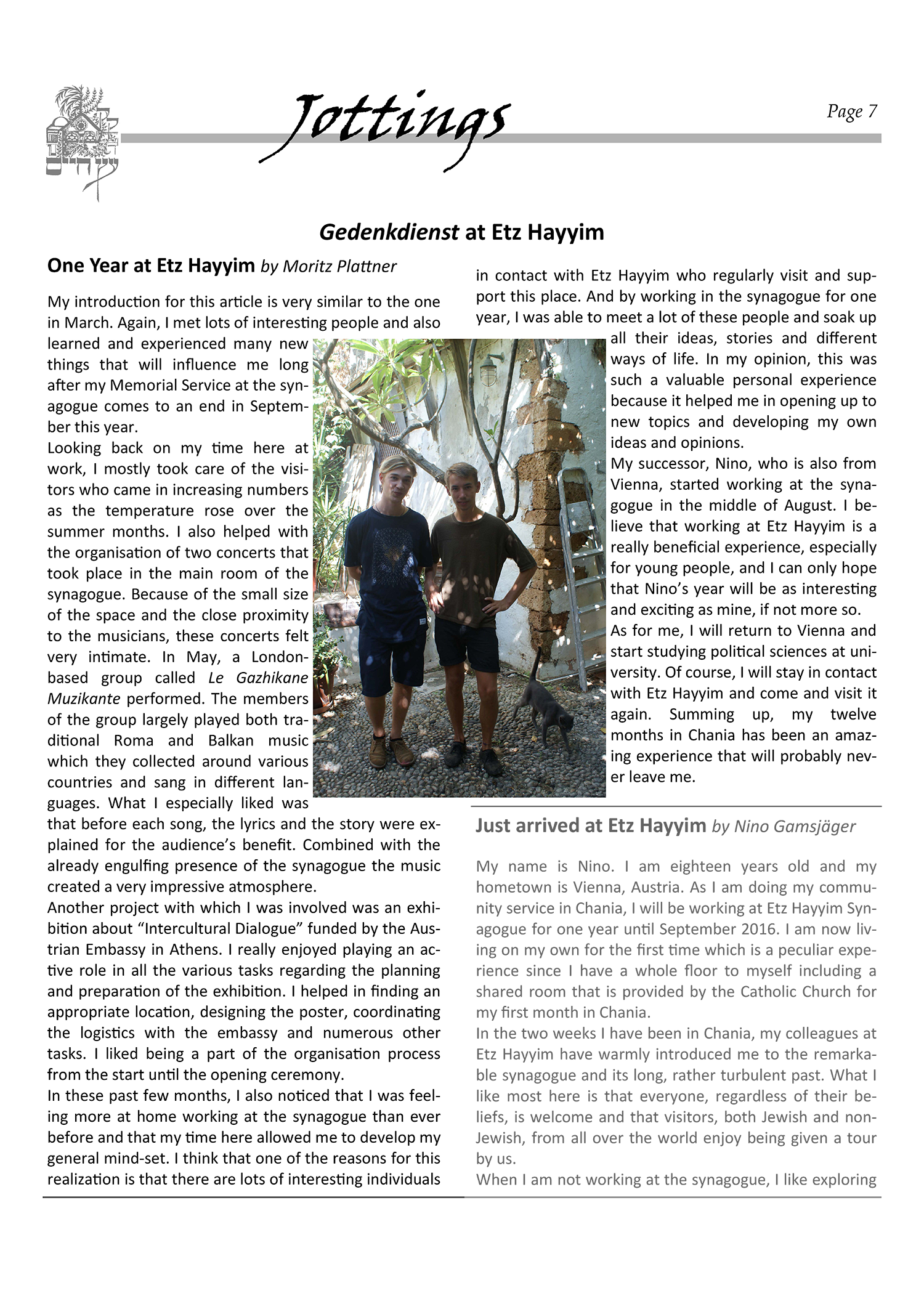 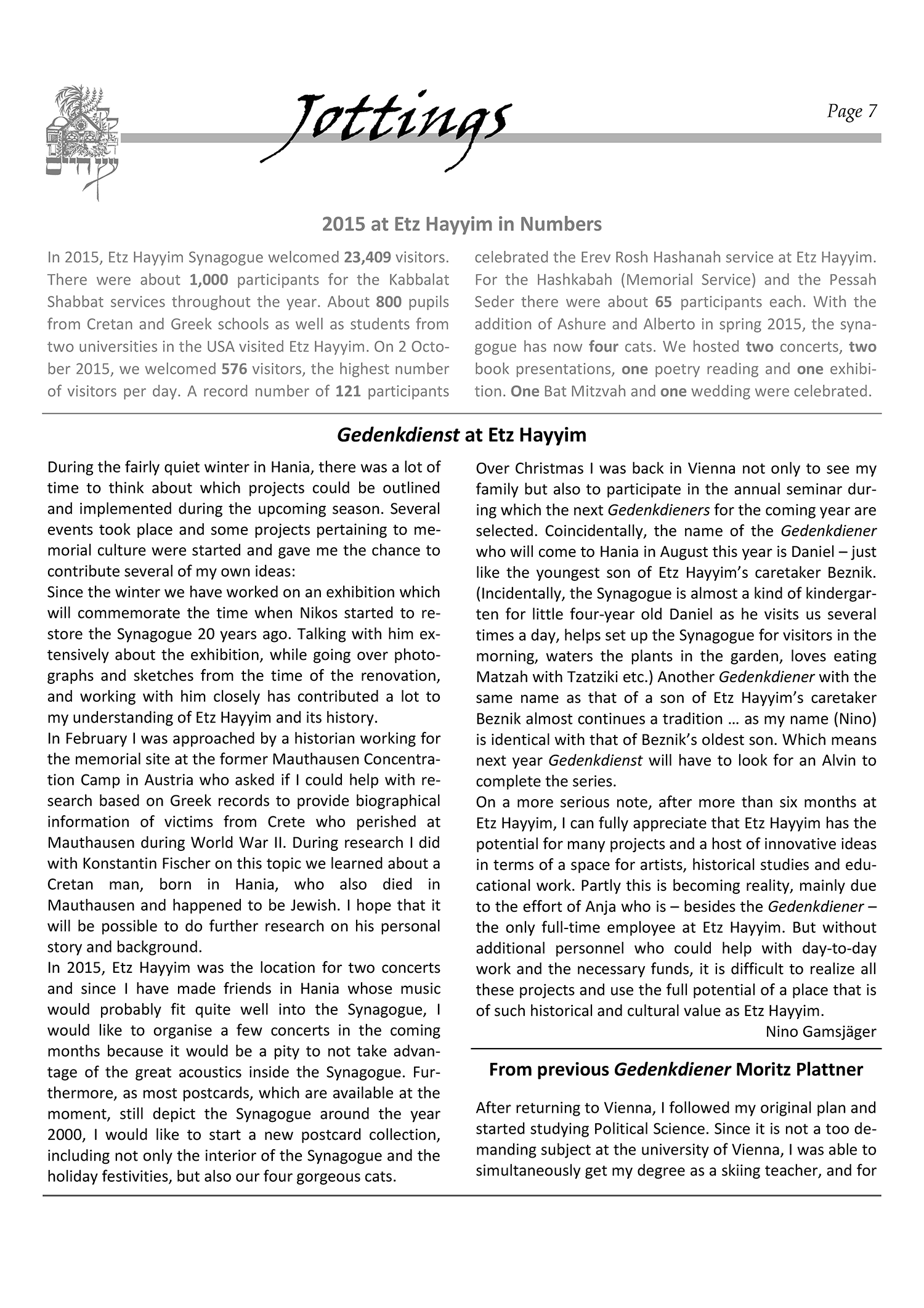 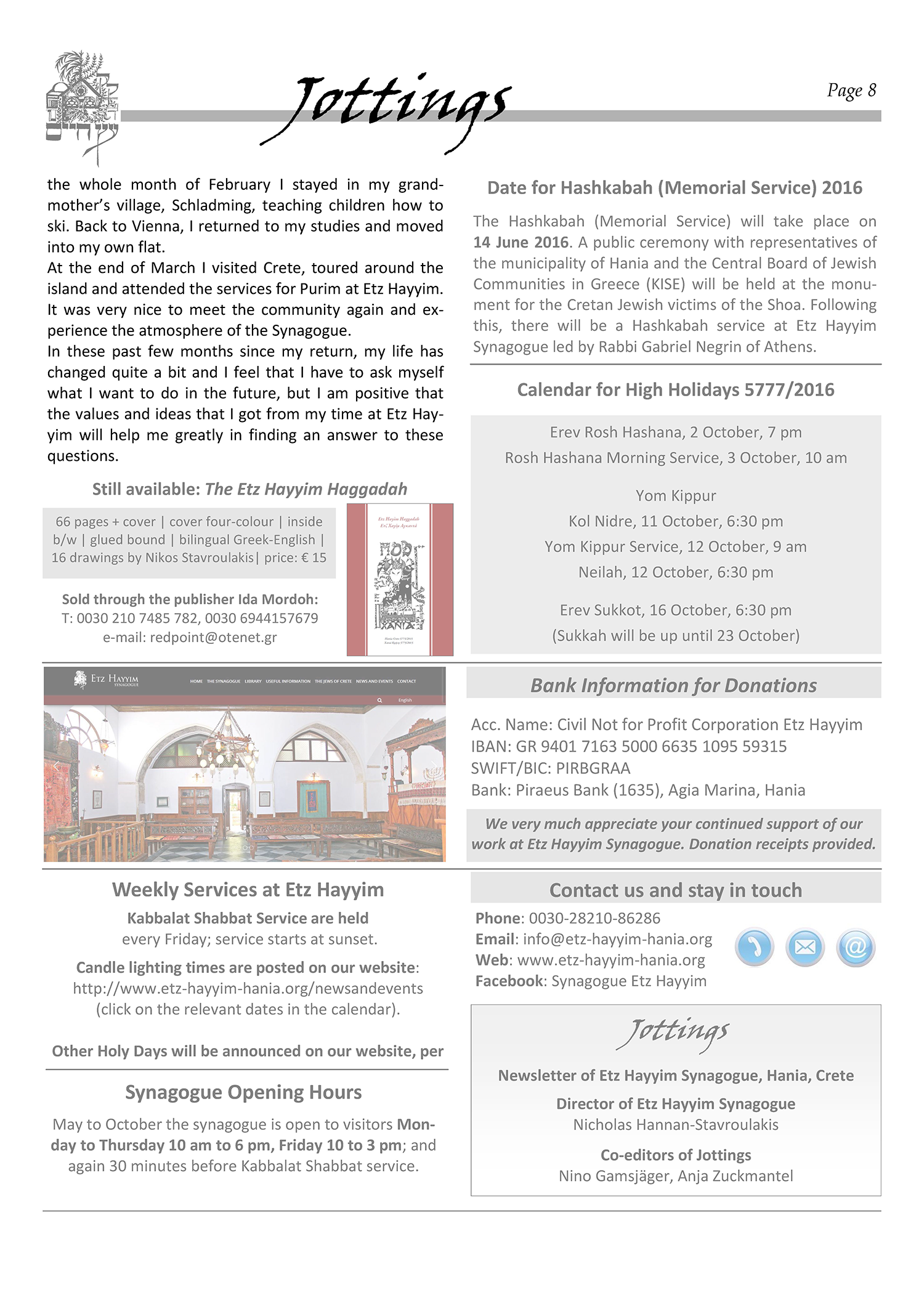 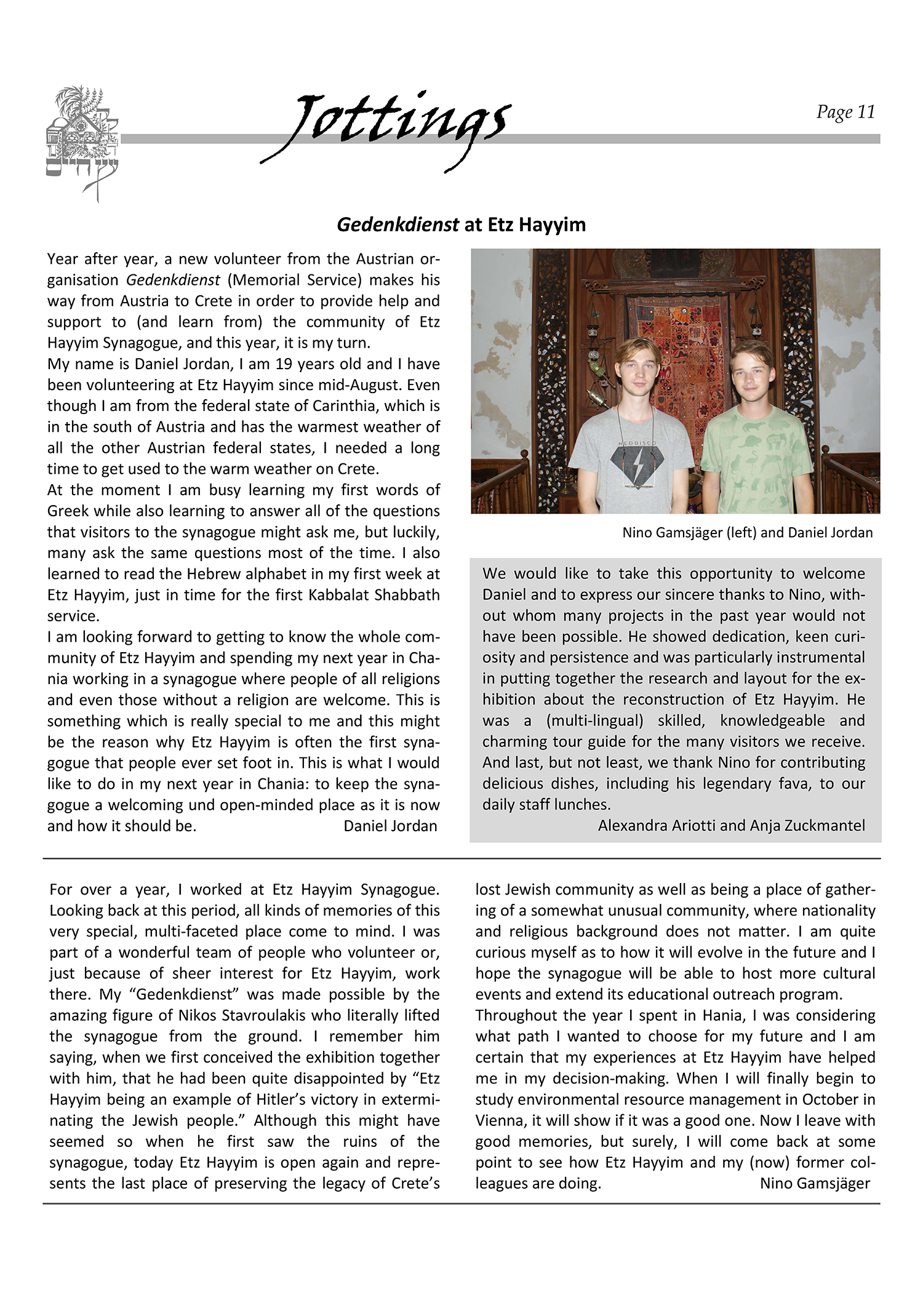 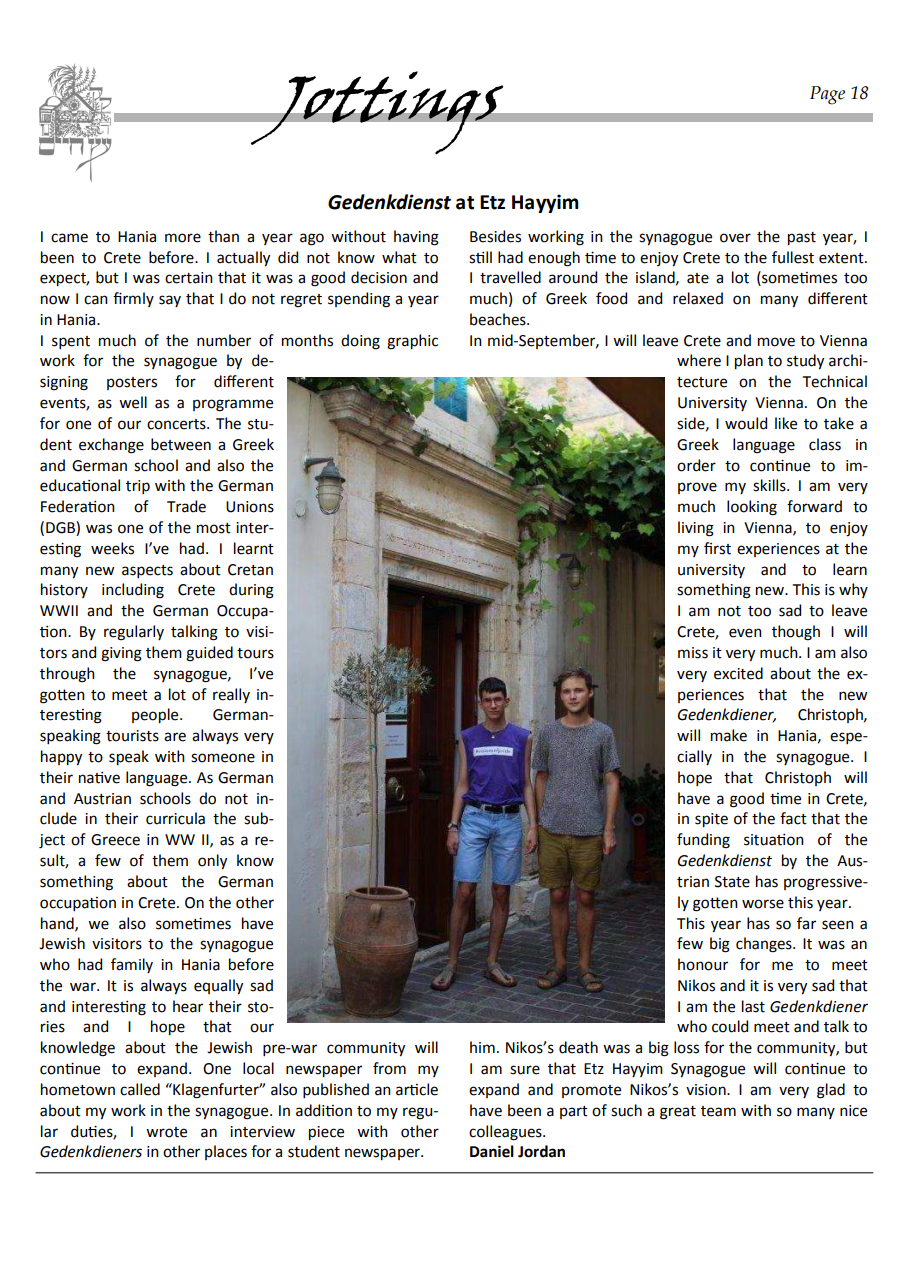 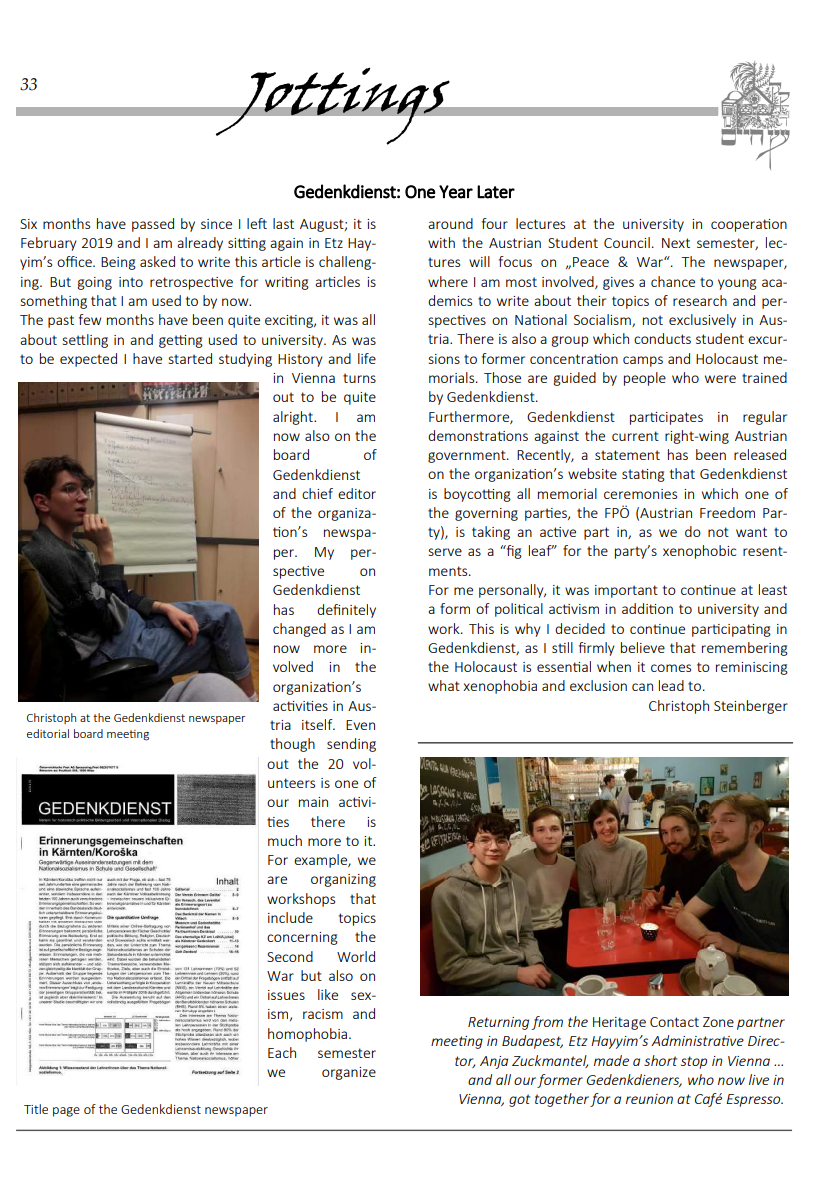 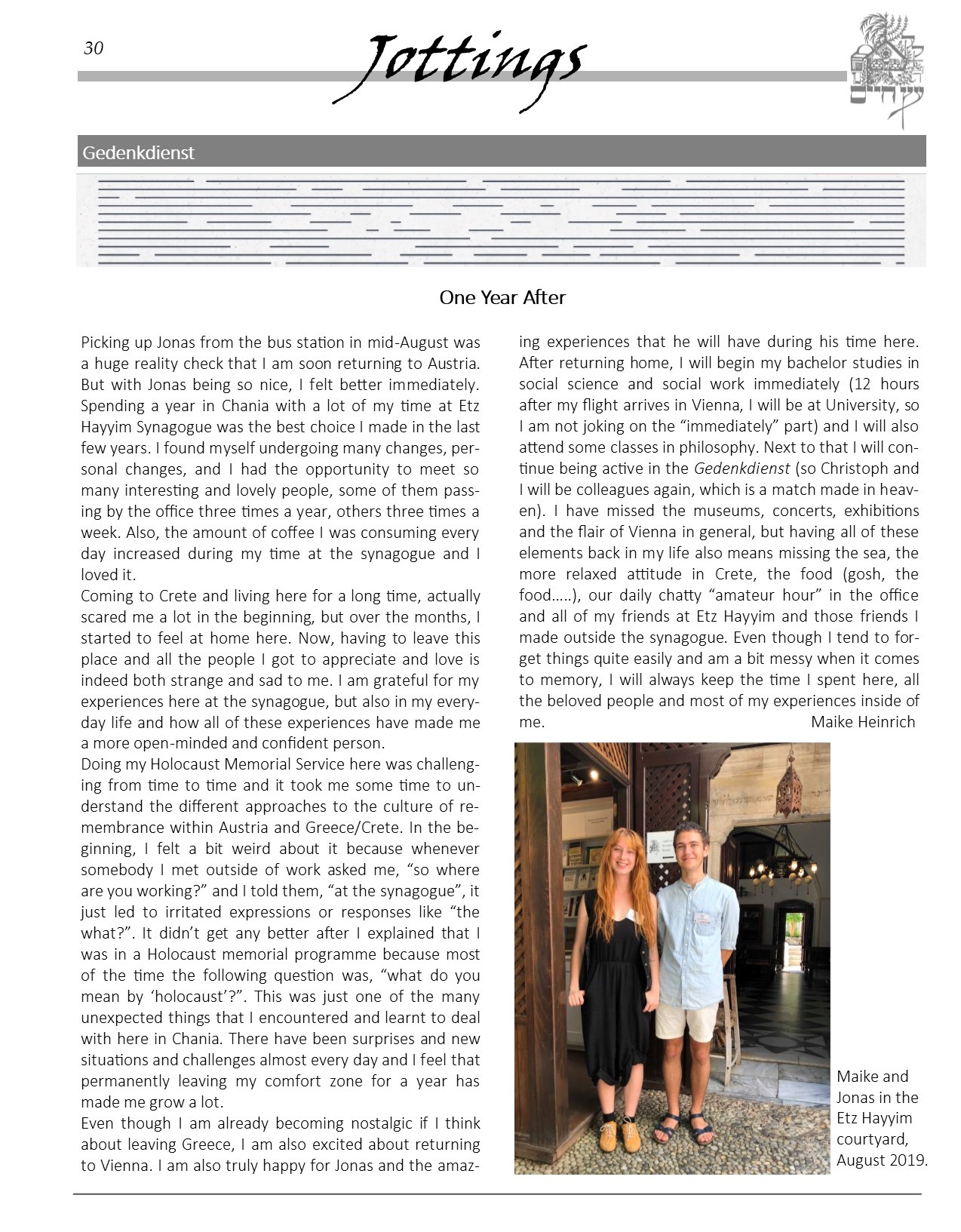 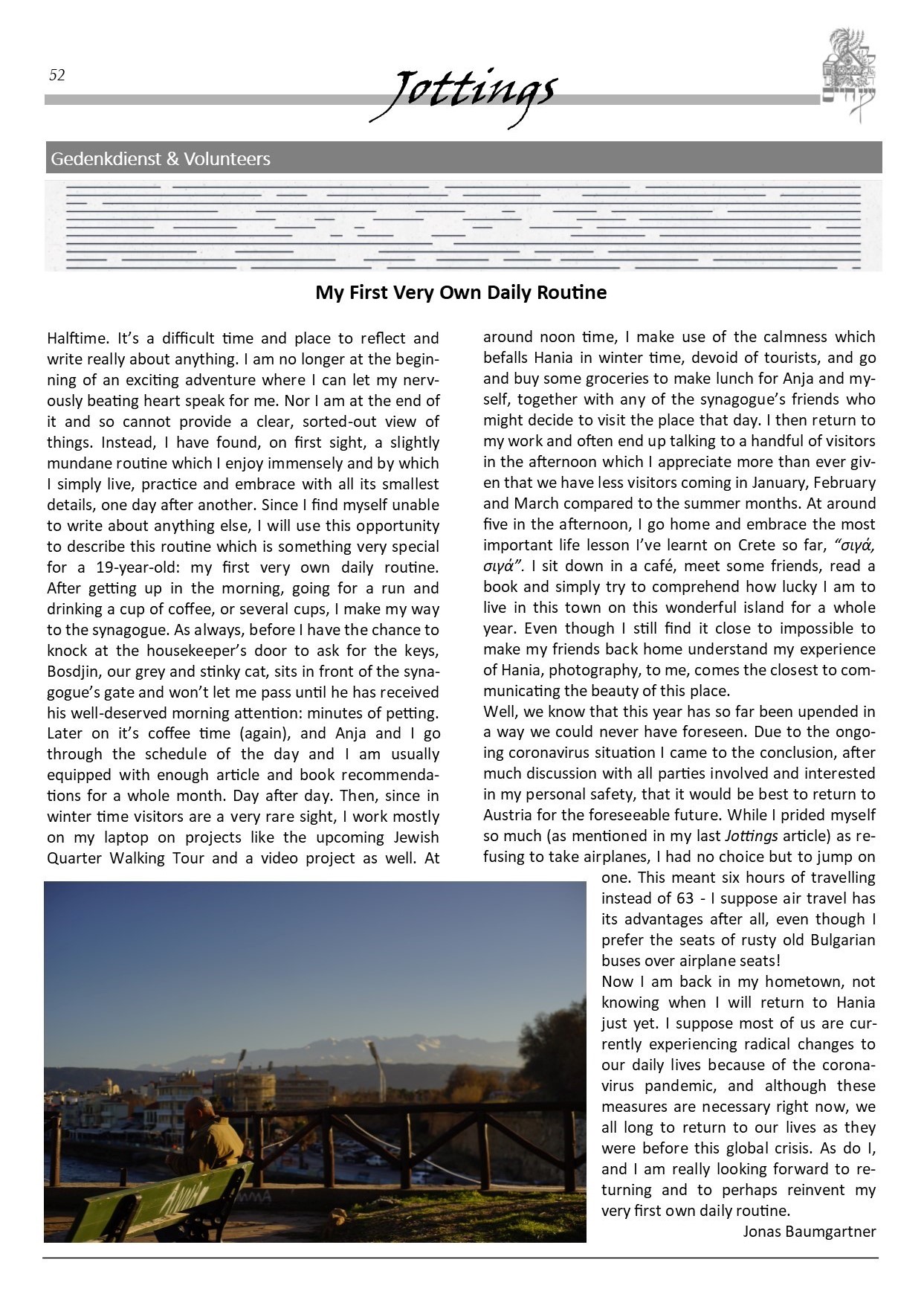 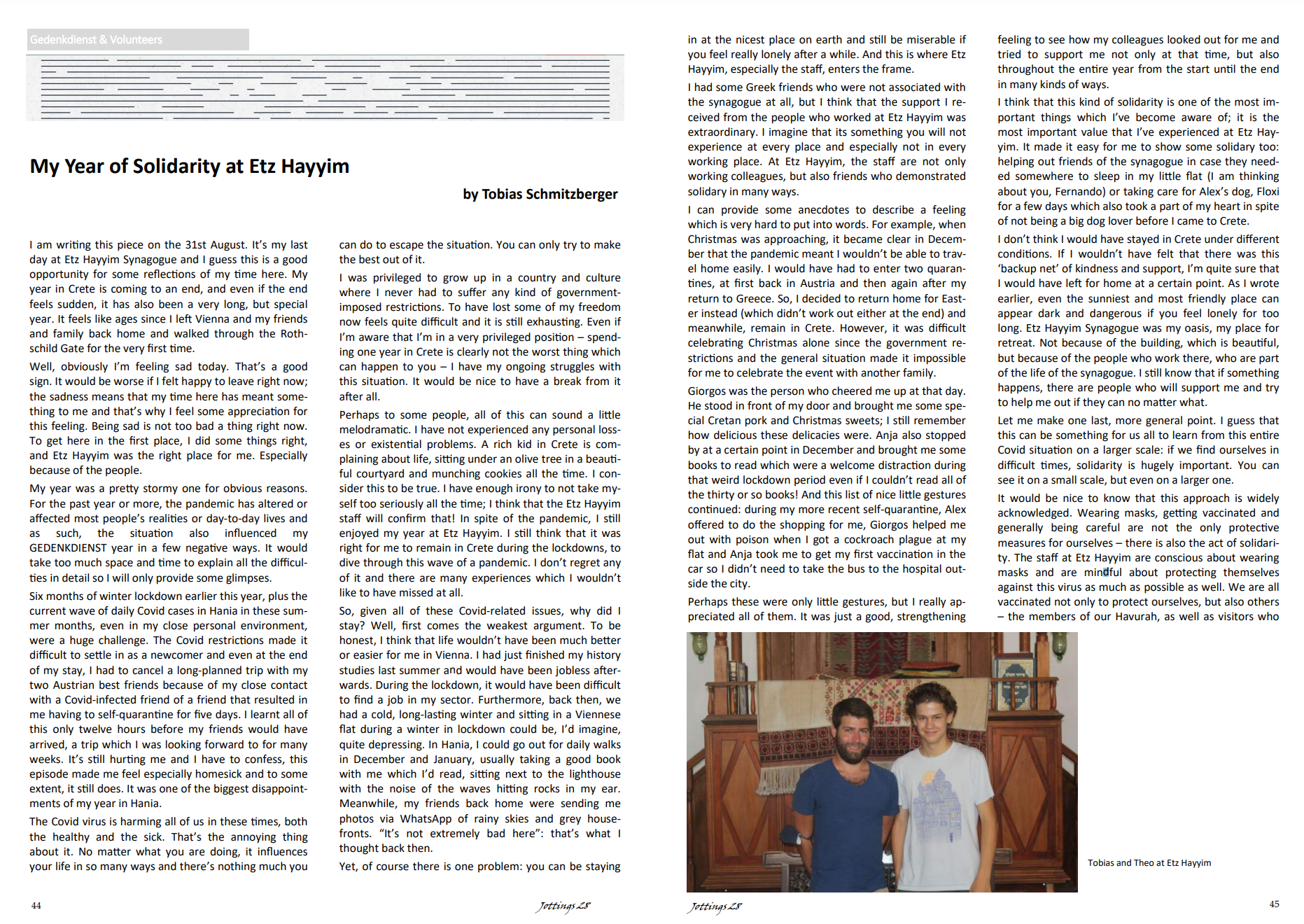