Small Greek-Jewish communities have rarely found their way into modern historical studies. With the exception of Salonica, the biggest Jewish community in the Greek state, the rest, which in fact are numerous, have not yet become the object of an in-depth historical analysis. Jewish Crete is such a case. If the circumstances of the destruction of the Cretan communities, which perished in the Tanais shipwreck in June 1944, have been reconstructed to a significant extent, our knowledge regarding these communities in the preceding years remains rather fragmented and sporadic.

The on-going project ”Reconstructing an absence, Narrating a presence: the Jews of Hania, Crete” wishes to fill this gap. It focuses on the Jews of Hania, the largest Jewish community on Crete in the 20th century, and seeks to reconstruct the community’s life in the troubled decades before the war. The project, which is supported by the Germanacos Foundation and conducted under the aegis of Etz Hayyim Synagogue of Hania, Crete is directed by Vassiliki Yiakoumaki, Assistant Professor of Social Anthropology at the University of Thessaly, Greece. The project’s researchers are Daphne Lappa, Postdoctoral History Researcher at the University of Crete, and Katerina Anagnostaki, PhD Candidate of History at the University of Crete. 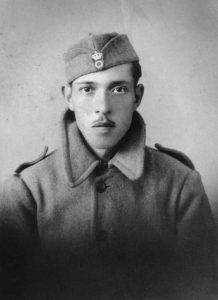 Leon Betsikas was born on 3 March 1917 in Hania and he lived with his parents (Raphael and Perla) and his four sisters (Hrysoula, Anna, Sterina und Sara) near the Etz Hayyim Synagogue in the old town of Hania. Even before the whole Jewish community of Hania was arrested and deported in June 1944, the Betsikas family and their relatives, the Trevezas family, saved themselves to Athens.

However, in early April 1944 Leon was arrested because he was Jewish and was deported to Auschwitz/Oświęcim, where he arrived on 18 April 1944. From there he was eventually brought to Mauthausen on 25 January 1945.

Leon Betsikas died on 24 April 1945 in Ebensee, a subcamp of Mauthausen, less than two weeks before the liberation by US-American troops.

Among his surviving family members his death is remembered as having been caused by him eating a large amount of food which his starved stomach could not digest – a cause of death for numerous concentration camp inmates at the time of liberation. The files of Mauthausen concentration camp, on the other hand, list Leon Betsikas’ date of death before the liberation. This would make it rather unlikely that he receive that much food at the time and therefore the circumstances of his death might have to be further investigated.